Partnered with Vue Cinema chain, The Gfinity Arena London is the largest dedicated Esports arena in the UK, and has hosted over 150+ events since it’s inception in 2015.

As well as hosting large World Championship tournaments Gfinity will also hosts small weekly events, so there’s always something to see at the arena.

It has 3 purpose built stages to accommodate a variety of different tournament events, and two large LED screens to broadcast the action to the audience. It also has one of the coolest tunnels in the world for competitors to make their way to the stage. The tunnel is in the shape of a hexagon with extremely cool looking LEDs spread across it.

Gfinity is an Esports company started in 2012 by Neville Upton. After holding several notable Esports events, Gfinity decided that they needed to create their own purpose built Esports arena.

Gfinity would then partner with the Vue Cinema chain in 2015 to create Britain’s first dedicated Esports Arena at a Vue Cinema location in Fulham, London. It seems like a great partnerhsip as Cinemas generally have the space and concessions set up, and Esports can guarentee the big crowds, so i wouldn’t be surprised if we see more Esports arenas pop up at other cinemas around the country.

Since it’s creation the Gfinity Arena has a reputation as the premier purpose built gaming arena in the whole of the UK. While venues like the Copper Box and Royal Opera House hold bigger crowds, there’s nothing quite like a purpose build Esports arena.

Click the thumbnails above to enlarge each image of Arena.

While there isn’t a dedicated Esports shop, there is a fully equipped cinema concession stands right before you enter the arena, making the Gfinity arena probably the best catered Esports arena in the world 😀

A view of the Gfinity Arena team store.

The Gfinity Arena is located in Fulham, London so is very easy to access through London’s tube system. Infact it’s right next to Premier League side Chelsea’s football ground Stamford Bridge.

As the arena is located in London it’s not advisable to drive due to the traffic and lack of parking. If you do feel like driving type SW6 1DN into your satnav to get there. The nearest carpark is Fulham Broadway Car Park which has a postcode of SW6 1LX and is only a 5 minute walk from the station.

The closest tube station is Fulham Broadway on the District Line which is pretty much located in the same building as the Gfinity Arena.

The nearest airport is is Heathrow Airport which is about 1 hour on public transport. However any London airport would do including London City Airport, Gatwick or Stansted depending on the availability of the flight you can get from your country.

What is the Address of Gfinity Arena?

What year was Gfinity Arena opened?

What is the capacity of Gfinity Arena?

Gfinity Arena has a spectator capacity of around 600 for Esports events.

What Tournaments and Events have been held at Gfinity Arena? 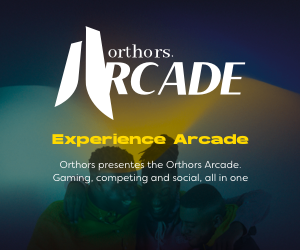