In 2020 there were a stunning 435.9 million viewers of Esports worldwide. Currently, a lot of the major Esports tournaments are held in preexisting venues, such as the Barclays center, Copper Box or Climate Pledge Arena. As the sport gets increasingly popular, the demand for dedicated Esports arenas will only increase. But as of right now there are already a ton of dedicated Esports Arena’s worldwide, so we’ve broken down the top 10 dedicated Esports Arenas in the world.

For number 10 in our list, we head over to South Korea, the kings of League of Legends. And so it seems appropriate that the LOL Park should reside in Seoul, South Korea. LOL Park may only have a capacity of 300, but it has one of the most innovative arena designs. All 300 seats are in a circle facing the central dedicated League of Legends stage, primed for 10 players to battle it out in 5 v 5 competition.

If you want to read more, check out our LOL Park guide.

Back in my day, the number of players in Esports matches were either 1 v 1, 2 v 2 or 5 v 5. But nowadays, with the introduction of the Battle Royale genre, some Esports competitions can have up to 100 players. Such a large amount of players requires an equally large-sized stage to host them all, and this is where the OGN Super Arena comes in. As well as allowing 500 spectators in, the OGN Super Arena has room for 100 competitors. This arena is perfect for games like PUBG, Fortnite or Call of Duty Blackout.

If you want to read more, check out our OGN Super Arena.

Back in 2012, Video Game High School was a fantasy show about a High School where all the kids did was play video games. But now, fast forward to 2021, and it doesn’t seem like such a fantasy, as Universities around the world have Esports teams and offer degrees in Esports. And so next we come to the Full Sail University who have built state of the art Esports Arena capable of hosting 500 people, though they could probably squeeze a lot more chairs in if they needed to. This very cool studio/arena has a central stage that can be set up in a variety of ways for a variety of different games and is free to all the university students who want to either play or produce Esports events.

If you want to read more, check out our Full Sail University Orlando Health Fortress guide.

Now we hop across the southern states of the USA from Texas to California, more specifically Santa Ana, to the Esports Arena Orange County. They have taken the historic Ramona Building and turned it into something quite spectacular. For large events, it can host 600 avid game fans, but it’s also open the rest of the time to causal fans who want to make use of the bar, stations and lounges. We love this style of Esports Arena of being a place for Esport fans to chill, as well as having the capability of hosting/broadcasting large events.

If you want to read more, check out our Esports Arena Orange County guide.

Our tour of Global Esports Arenas takes us around the world again to Jolly Old England. In at number 6 is the Gfinity Arena located in London, capable of hosting 600 fans. Gfinity partnered with UK cinema chain Vue to convert one of their cinemas into the Gfinity Arena. This venue boasts one of the greatest Esports stages int he world with a cool hexagon tunnel for combatants to walk through. We absolutely love the idea of converting cinemas into Esports Arenas, as you get comfy seats, a large screen and popcorn concessions just outside! Who knows, maybe we’ll see more cinema/Esports Arenas in the future.

If you want to read more, check out our Gfinity Arena guide.

We are getting into the big leagues now as the Fortress Melbourne is a dedicated Esports Arena with 1000 seats. It opened just last year in 2020, sadly the Coronavirus pandemic put a stop to any Esports competitions, but we are expected bigs things from the space in 2021. Primed for up to 6 v 6 competitions, the beautiful stage partnered with Alienware has more green LED lights than you can shake a stick at.

If you want to read more, check out our Fortress Melbourne guide. 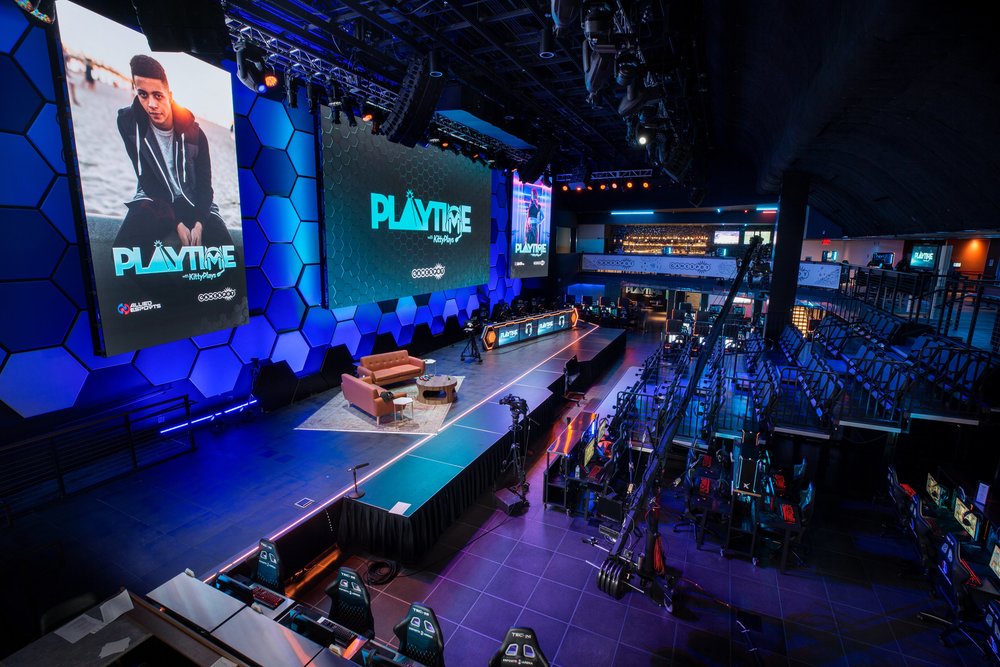 Up next, we head to The Entertainment Capital of the World, Las Vegas. Luxor Hotel has repurposed one of their former nightclubs into the mighty Esports Arena Las Vegas, currently called the HyperX Esports Arena Las Vegas, due to sponsorship. This 1000 seat arena has pretty much hosted every major Esports game, including Super Smash, Street Fighter, League of Legends, Rainbow 6 and Rocket League. Like the Esports Arena Orange County, there is no fixed seating so the public can enjoy the floor space during most days. So if you’re ever in Sin City, we recommend popping in to see what all the fuss is about.

If you want to read more, check out our HyperX Esports Arena Las Vegas guide.

The 3rd biggest dedicated Esports Arena, beating the HyperX and Fortress Melbourne by five whole seats, is the Gwangju Esports Arena in Gwangju, South Korea. Opened in 2020, this arena has a very cool stage arena with a dedicated walkway in front of the stage and has two permanent desks making it ideal for some team action. Although it probably has the least amount of LEDs of any stadiums we’ve looked at thus far, it can certainly pack in the crowds for large Esports Events.

If you want to read more, check out our Gwangju Esports Arena guide.

They say, in Texas everything is bigger, and this rule certainly holds true for Esports Arenas. The Esports Arena Arlington is the biggest Esports Arena in North America and the 2nd biggest in the whole wide world with an impressive 2500 seats. There’s an out of this world stage with cool jagged edges on the LED screens and stage, making it look very futuristic. Outside of the arena is the Gamer Gallery, open to the public who want to play some casual games, and they even have a fricken tour!

If you want to read more, check out our Esports Arena Arlington guide.

And finally, we have the biggest dedicated Esports Arena in the world with the Three Gorges Harbor Esports Stadium, sometimes known as the Zhongxian Esports Stadium. The Three Gorges Harbour Esports Stadium has the highest capacity of any purpose-built Esports Arena with a whopping 6,000 seats for Esports spectators. All seats form a circle, facing the central circular stage, which has three colossal LEDs facing the audience to highlight the action below. China have definitely sent a message to the rest of the world with this Esports stadium, as they are crowned the winners for having the largest dedicated Esports Arena for 2021.

If you want to read more, check out our Three Gorges Harbor Esports Stadium guide.

So that was the current biggest dedicated Esports Arenas for 2021. However, be sure to check back next year as we are expected the fusion arena to open in Philadelphia hopefully this year. With a reported capacity of 3500, we could have a new number 2.

Launched in 2021 our mission is to be the number one E-Sports event resource on the internet.

Thanks for visiting and keep gaming!

How many people watch Esports?

How much do Esports players make?

How do Esports teams make money?

Why is Esports a sport?

How to become an Esports player?